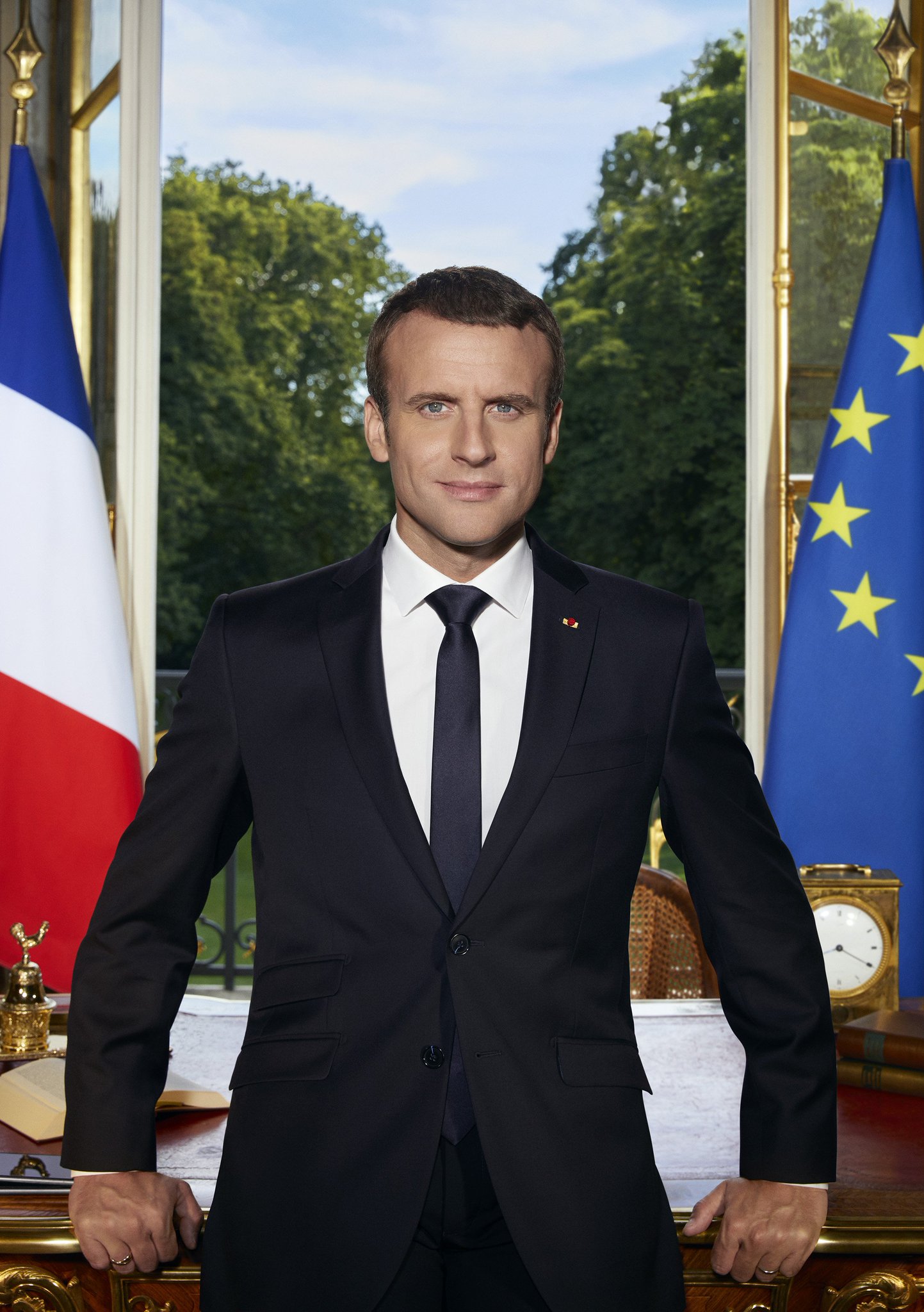 The President unveiled on Twitter (where else?) his official portrait taken by his official photographer Soazig de la Moissonière (born in St Germain-en-Laye – where else). Sober-suited, he’s equidistant between the French and Euro-flags. We note that time’s ticking by, and that the man of action’s two iPhones are by his right hand (with the image of the elegant inkstand reflected). He’s half-sitting, half-standing. He’s indoors, but not far from outdoors. All perfectly placed for a centrist. But what’s the takeaway from that neo-Putinesque near-bursting jacket?

The Elysée Palace advises: the open book is de Gaulle’s ‘Memories of War’, under the clock (closed) are Stendhal’s ‘The Red and the Black’ and Gide’s ‘Fruits of the Earth’.

Here’s a super pic by de la Moissonière of President Macron on Election Night. Put on a hat, get rid of that Pyramide and you could almost be in Vienna with Karas’s zither

No not that one. Not yet, at least.

Indeed important trans-Atlantic traffic is about to be in the reverse direction. This week President Macron invited Trump to attend the annual Bastille Day 14 July celebrations – and celebrate the centenary of the USA’s (tardy) entry into WW1 … and Trump’s accepted. This should be more grist to the continuing Franco/Brit battle of one-upmanship. French TV news thought fit to give Trump’s Advent the accolade of Most Important News In The Entire World That Day.

[Trump has evidently, got over President Macron telling the Journal de Dimanche about their white-knuckled handshake when they first met: ‘My handshake was not innocent’, as well as likening Trump to Putin and Erdogan. The Washington Post quoted Trump’s aides: ‘Hearing smack-talk from the Frenchman 31 years his junior irritated and bewildered Trump’. While Trump must also have got over (ignored?) the Macron/Schwarzenegger selfie delivering ‘together to make the planet great again’ following the announcement of the US withdrawal from the Paris Climate Accord.]

France’s Congress is the name for the 2 houses of the French Parliament (National Assembly and Senate) meeting jointly in Versailles. Such meetings are held when:

The Jupiterian President will address Congress – and state his Government’s programme – in Royal Versailles on 3 July in the silence befitting such occasion. And it may well be but the first example of an annual event: a sort of State of the Union address perhaps … except that it’s delivered annually by the US President other than in their first year in office. [Incidentally, it’ll be his 2nd time in Versailles in a month – following his welcoming Putin there in the Palace’s Gallery of Battles.]

The very next day Prime Minister Philippe will be giving his own statement of the Government’s programme (I bet without too many (any?) additional bells and whistles) in front of a considerably more noisy and combative National Assembly.

Murmurings that the timing of the President’s address to Congress has been organised merely to steal the Prime Minister’s thunder incorrectly imply that Jupiter ever allowed anyone to steal his thunder. Certainly it’s one of those issues that gets politicians terribly excited – all those variously Inside the Beltway or In the Westminster Bubble – but may not have much real traction beyond the Paris Périphérique.

The press will be cursing too. First they have to parse and analyse two surely identical speeches in a vain attempt to find a cigarette paper’s worth of difference ‘tween President and PM. Further, they’ve been done out of their 14th July exegesis of the President’s annual TV interview which allowed a tour d’horizon.

So instead of questions posed to the President by 2 journalists at the Elysée Palace – a tradition originated by Giscard d’Estaing in 1974 (carried on by all bar Sarkozy) – there’ll be an unquestioned address given by the President in the Versailles Palace to the people (via Congress).

Advisers told Le Monde that the President’s ‘complex thoughts’ did not lend themselves to the exercise of an interview. His refusal will certainly avoid him being asked about proposed changes to the Labour Law, as well as the Trump invitation.

This all comes after journalists from 20 press organs (including Agence France Presse, Le Monde, Le Figaro, Europe 1, France 2, Radio France) denounced what they described as ‘extremely worrying signals … [with] the executive attempting to bring pressure to bear through judicial repression and the impugning of motives’ following the leaking of the draft Labour Law.

What did you do on Monday 3 July?

The LREM Deputies and Senators will obviously be there en masse.

But Mélenchon’s Unsubmissive France Deputies will be absenting themselves: ‘we’re rebelling and we won’t be subdued. Our only way to show our anger … is not to go to Versailles’ because the President’s speech disses the PM and Mélenchon’s the man for respecting tradition (irony). And they’re all going to the Place de la République instead.

Others have commented too:

That mini-grouplet of 31 Deputies, elected some days ago as ‘Socialists’, have leapt ahead of their now near non-existent Party. Their Parliamentary group is now known as ‘The New Left’. For the first time under the 5th Republic ‘Socialist’ is not part of their title. It’s strongly rumoured though that the word ‘socialist’ may be in their ‘political declaration’.

8.03.2017 (International Women’s Day): ‘A woman Prime Minister? That’s rather my hope. But I’m not going to choose a Prime Minister because she’s a woman. I will choose the most competent Prime Minister, hoping they will be a woman.’ (Emmanuel Macron. #EllesMarchent (sic))

28.03.2017: ‘The Prime Minister will be chosen on the criteria of experience and competence. I would like it if it were a woman.’ (Emmanuel Macron)

27.06.2017: Election of LREM candidate as President of National Assembly [ranks 4th after President of the Republic, PM and Senate President] who will, effectively, be ‘appointed’ by the majority Party. LREM Deputies chose between 2 female/2 male candidates. Monsieur F. de Rugy (ex-ecologist and ex-candidate to be Socialist Presidential candidate) was duly chosen. And he’s now National Assembly President.

One thought on “Will this ‘special relationship’ have more accents?”