The pleasuring of the rich: flaunt your luxury yachts, private jets and gold ingots

Macron’s idea was to transform the originally-baptised ‘Large Wealth Tax’ (1982), transmuted into today’s more high-flown ‘Solidarity Tax on Wealth’, into a ‘Property Wealth Tax’ (the British equivalent would have been its ‘Mansion Tax’).

Taxing houses alone would be intended to lead to an increase in the finance of socially useful activities. Perhaps people will sell off their second/third homes and put their money to better use by investing in the productive economy? Hmmm. Perhaps.

Finance Minister Le Maire said 330,000 now pay ISF, with the State getting €4.1 billion (though it’s an expensive tax to collect). Once changed to a ‘Property Wealth Tax’, it’ll be paid by 130,000 households and will bring €0.85 billion to the coffers.

Last week, the Government’s draft 2018 Finance Law was published. Its first Budget. And there, writ large, was the proposal to nearly wipe out that highly symbolic Mitterandian Wealth Tax. Something the Right had promised for nigh 40 years, but never delivered.

Instantly the French press began highlighting the stark contrast between:

‘Macron, President of the Rich’ became the taunt of the day … and it’s a story that’s evidently found traction. Those about-to-be-untaxed ‘luxury yachts, gold ingots and private jets’ were the symbol of The New Inequality. Yet Prime Minister Philippe on TV’s France 2 loyally ‘took responsibility for … a measure which is unpopular, but useful for the French economy’ because it would encourage rich individuals not to become tax exiles from France, while motivating investment in ‘the real economy’. 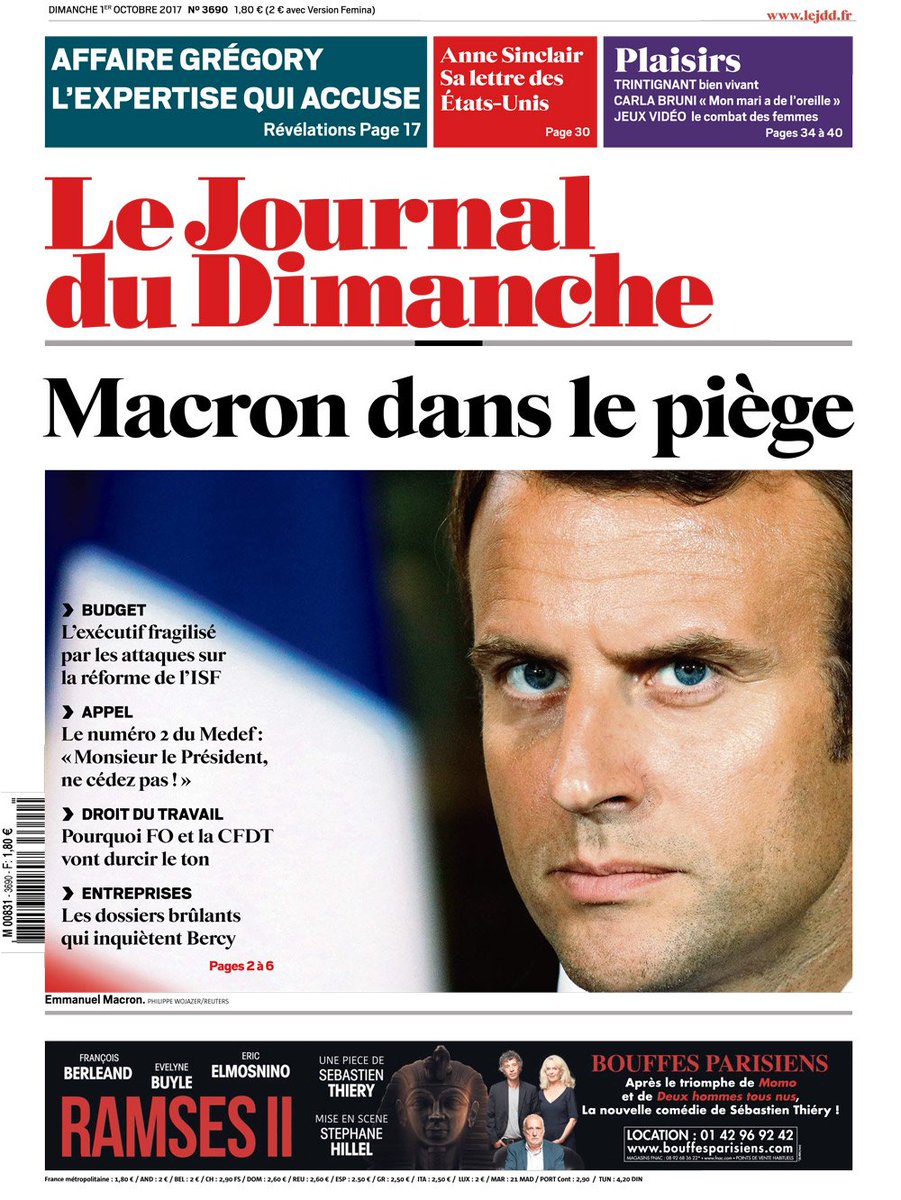 None other than Francois Bayrou himself returned to active politicking after a not-unwelcome period of silence on his part. [Bayrou, centrist leader of the Democratic Movement, had refrained from pointlessly being Presidential candidate for a 4th time. This boosted Macron’s standing at a critical time in his possibly faltering campaign. Bayrou’s reward was nomination as Minister of Justice/2nd among equals in Macron’s 1st Government. Bayrou lasted all of 35 days in this lofty role. Then he took the pearl-handled revolver and plunged, Icarus-like, Pau-wards to spend more time … as Mayor of the burghers of Pau. Bayrou’s name had been swirlig, with fellow-Ministers from his Party, in the investigation into the ongoing Euro-MPs’ fictional employment scam.]

On radio station Europe 1 Bayrou indicated (in French) that his 47-strong group of MoDem MPs would not necessarily be up for supporting the Government. This was heavy stuff. He condemned the ‘unbalanced’ and ‘unjust’ changes to the Wealth Tax. Bayrou said ostentatious signs of wealth needed to be taxed.

And lo, there was an grinding of gears in the land and a rapid about-turning in policy. And it came to pass that The Wealthy may not yet have it all their own way.

Minister of Public Action and Accounts, former-Républicain Darmanin [this ex-co-ordinator of Sarkozy’s failed Presidential campaign has just been thrown out of the Républicain Party for going Macronian], went on BFM TV opining that yachts, jets and similar signs of ‘ostentation’ should be taxed. President of the National Assembly, ex-‘Green/Socialist’ de Rugy, was on France 3 TV  stating that he was evidently in favour of taxing works of art as ‘wealth’, plus ‘it would be logical to tax luxury yachts too’. Capping it all, even brave Deputies from the President’s En Marche Party got permission to peer over parapets and mutter that the Government’s proposals had to be amended.

Oddly, right-leaning Le Figaro headlined the issue several days after everyone else. Today they announced ‘Macron in Wealth Tax reform battle’ [Maybe their staff, like myself, have depleted numbers. Can they also only deal with one big story weekly?]. But, at least, by coming in late they gave us the punchline that ‘The Executive is thinking of making concessions’.

Le Figaro‘s front page editorial made their own position entirely clear: ‘Attacks against the rich! … In a country made rotten by the class struggle, where one is jealous of success and where becoming wealthy is highly suspect etc etc’.

So we now wait to see what Parliament will actually do with its apparent ‘Licence To Tax The Most Ostentatious Elements of the Wealth of the Filthy Rich’.

The President launched Europe 2.0 in Sorbonne University: NINETY EIGHT minutes of passionate discourse  (#EuropeanInitiative) to move us all on from a ‘too slow, too weak, too inefficient’ Europe (it’s all here)

Declaring ‘I have no red lines, only horizons’, Macron’s speech fizzed with what he called his ‘concrete’ measures. Intended to counter the rise of far-right nationalism and establishing a multi-speed EU, he said that such measures included:

The New York Times was underwhelmed: ‘Emmanuel Macron’s Lofty Vision of Europe Gets Mixed Reviews’. Harvard’s France-watcher, Arthur Goldhammer, gave the speech a ‘mixed review’: ‘The speech was echt Macronism. Lofty in conception, bold in symbolism, vague on details. Macron’s method is to indicate a general direction and leave the actual destination sufficiently unclear that whatever end is finally chosen can be declared as a victory. It worked with labor code reform; it might work with Europe. … Europe is indeed necessary for France’s future, as Macron suggests, but until its fruits start showing up in people’s paychecks, it’s going to be a hard sell. Macron can be a persuasive salesman, but potential buyers are already asking about le service après-vente.’

Yes, maybe the speech was (necessarily?) short on detail. But, even for students who’d obtained freebie tickets, a 98 minute ‘marathon’ (CNN’s adjective) speech was surely at the outer limit of tolerance.

I’d myself rather buy into the far more positive Guardian leader analysis: ‘Speeches do matter. They can infuse energy, rally support, set goals, and they help understand challenges in a way that makes it easier to confront them. Mr Macron’s message needs to be heeded: Europe needs more, not fewer, ambitions.’

Should you want a broader flavour of Euro-reactions, there are several here (in English).

The President’s proposals were undeniably exciting for those wanting More Europe [‘A very European speech … Europe needs courage …’ tweeted EU Commission President Juncker]. However, it could well be that the President’s initial positioning on the Wealth Tax will have more impact on the general consciousness. Wealth Tax may be the issue defining the start of the Presidency more than ideas on Tomorrow’s European Union.

Opinion polls: neither a Prime Minister nor a Leader of the Opposition be

The PM had two hours on France 2‘s TV flagship Emission politique – here for those with the stomach for hours of unadulterated President and Prime Minister at a single sitting.

This included a mano a mano with hard-left leader of France Unbowed, Mélenchon. Over 3 million watched – comparable with the numbers who saw Le Pen (3.5m), Fillon (3.3m) and Macron (3.5m) in the heat of the Presidential Election campaign. Significantly, Philippe ended up with a satisfaction rating of 52%: this is higher than any of the dozen politicians who had preceded him on the show.

To put this in context, Odoxa had previously polled on both Prime Minister Philippe and ‘Self-Anointed Leader of the Opposition’ Mélenchon.

Premier Philippe’s TV appearance can surely only have boosted his modest ratings [as Churchill apocryphally said of Labour Prime Minister Atlee: ‘He’s a modest man with much to be modest about’].

Self-Anointed he may be as Leader of the Opposition, but Mélenchon (buoyed up by his Party holding no less than 17 seats out of the National Assembly’s total 577) appeared to have support for his oppositionist role, but definitely no more:

Maybe still more would today applaud Mélenchon’s actions on behalf of the nation. Now they know that his France Unbowed Party has laid a motion before the National Assembly saying that only the French tricolore and the United Nations flag should be allowed within the Assembly, ie banning the European Union flag, currently alongside the French national flag.

With this move, France Unbowed once again proudly shows the similarity of their approach – in relation to several areas of ‘sovereignty symbolism’- to that of the Front National. Le Pen had wanted to ban the EU flag from all public buildings, and several FN Mayors have already taken it down from the front of their Town Halls. Now Mélenchon attacks it in the National Assembly.