I hear the sound of … two hundred hands clapping

In mid-October, 100 leftie Deputies and Senators (plus one ‘Constructive’ right-winger) wrote an open letter to Libération. What, they enquired, would be the effects of the Government’s tax and budget measures on France’s Seriously Wealthy?

The Finance Ministry responded with a Halloween shocker. France’s 100 wealthiest households will each see their tax bills slashed by an average of €582,380. While the ‘Top 1000’ will garner cuts of an average €172,220 per household. Overall 1% of France’s households will be rewarded with a mouth-watering 44% of Macron’s total tax cuts.

The President has continued his dramatic U-turn in communications policy. First it was another blockbuster interview, with Der Spiegel granted access to the latterly-loquacious President. That was followed by Emmanuel Macron’s very first live TV interview with real live French TV journalists on TF1 and LCI over all of 75 minutes. Famine to feast indeed. Shows what 3 months and a giant tumble in public opinion can get you to reflect on – Ifop has Macron dropping back to 42% satisfied, down 3 points in October. 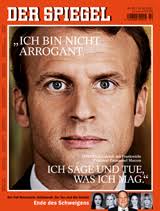 Some choice Macron quotes, with some of Der Spiegel‘s questions to show the extent of their punchiness. [I have no idea as to the language of either questions or answers] 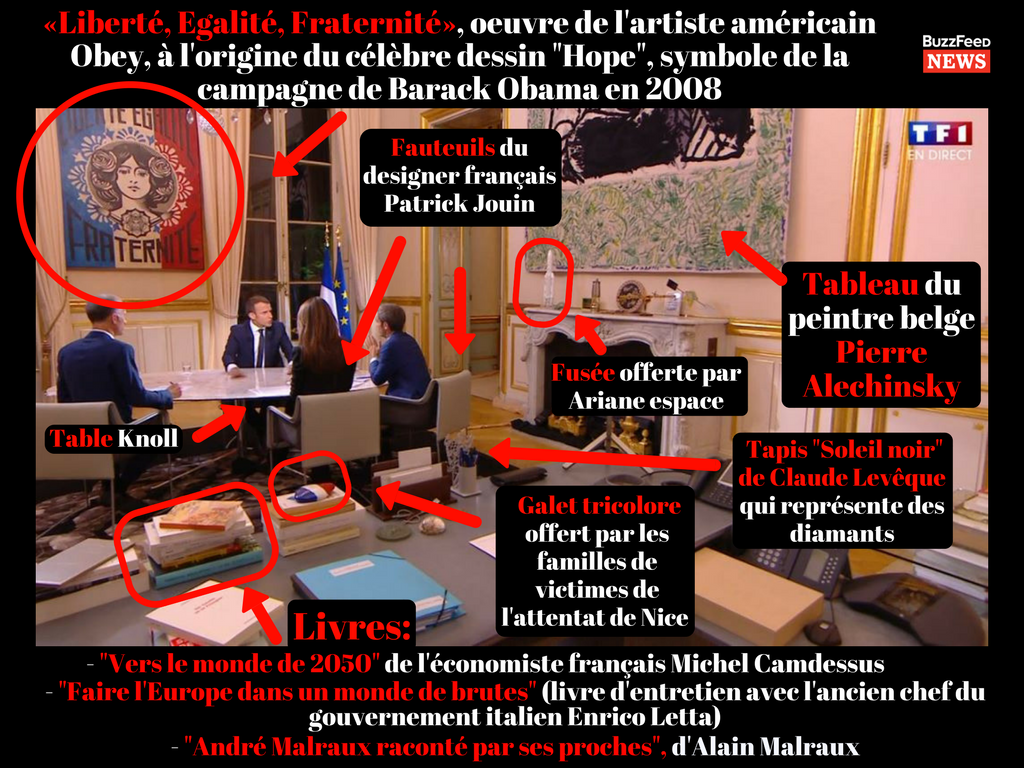 Here’s a still from the interview. Note (thanks to Buzzfeed’s Jourdain’s sharp eyes) behind the President a Shepard Fairey Marianne [he of the Obama ‘Hope’ image], above the fireplace an Alechinsky (a Belgian working in France) + seriously heavyweight books. We also learnt:

Nothing like a good look backwards to help you reflect on what to do going forwards. 2018 is replete with anniversaries:

The Man Who … will lead the right-wing Républicain Party (after a pretend election by Party members against 2 other candidates) is Mr Laurent Wauquiez. He declined anything as pointless as a TV debate with his opponents.

This hard-line 42-years-old former Minister is a not-very-pleasant piece of populist work. He celebrates The Nation and France’s ‘roots’. He fights against ‘massive immigration’ and ‘handouts’. He blows a loud dog-whistle when he says ‘It’s not up to France to adapt itself for foreigners; it’s up to the foreigners to adapt themselves for France’.

Last weekend Wauquiez ratcheted up the bile in what the Journal de Dimanche referred to as a ‘vitriolic’ article. ‘[Macron’s] way of speaking about France and the French people shows there’s no love only haughtiness … He is, without doubt, the most Parisian President ever, and possessed by a hatred of the provinces … He chose … Jupiter because Jupiter’s not only the one who decides, but also the one cut off from the world of people. He’s not a god who protects, but a god who causes lightning to strike. He’s not the loving god of the Bible but the violent god of antiquity [Did Wauquiez really want to contrast the wrathful tooth-for-a-tooth Old Testament deity with the turn-the-other-cheek New Testament version but felt that might not go down so well with some of his voters?]

[Wauquiez’s Principal Message:] ‘The problems of France come back to its identity, its relationship with diversity, the question of multiculturalism … and the urgent question which produces a procession of dead people, fundamentalism. But Macron’s not prepared to face that; he flees from issues he views as toxic: the regulation of immigration … the question of islamism’. [Certainly sounds like a clarion call for Front National voters to return to their Républicains home]

Its President, Christophe Billan, summed up their warped world view. He was riffing in right-wing rag L’Incorrect on the idea of sharing a common platform with temporarily(?)-departed Marion Maréchal-Le Pen (the Evil Granddaughter wot wants to return the Front National to its solid ultra-right roots and dropping any pretend Social-ism from their National Socialist platform).

Billan vomited: ‘You are either spiritually Christian or culturally Christian but you can’t be French without being firmly planted in one or other camp.’ None of that boring old ‘Judeo-Christian’ inheritance for Billan.

Some are born French, some achieve Frenchness, and some …

… declare their Frenchness through their longevity in both years alive and in France and having French offspring. This excellent news is by way of a small (and utterly inadequate) explanation of my over-extended silence.