France’s summer political thriller of 2018 starred previously unknown Alexandre Benalla, Presidential Bodyguard (or, maybe, humbler Body Man … though there’s little humble about Alexandre). He got his 15 minutes of (in)fame beating up May Day demonstrators while (illegally) wearing police insignia. He was finally sacked from the Presidential team – after much hesitation and deviation – once film and ‘further information’ of his misdeeds hit the front pages thanks to Le Monde.

Further intriguing information was recently revealed by Le Monde, fresh from their peek at the (theoretically confidential) judicial investigation into Benalla’s MayDay violence. His line to the judges: he was merely carrying out his obligations as a citizen. He said the only reason he was up before the beaks was ‘cos he worked for the President: ‘I did my duty, and if it had to be done again, I’d act in the same way. I’m proud of what I did.’ [Here, again, is film of Benalla beating up demonstrators. A shocker, it merits a 2nd viewing] But ‘proud’? Is that the appropriate adjective? As for his description of what occurred between him and the demonstrators as chamaillerie (generally a ‘squabble’, ‘row’ or ‘bickering’): that surely lacks something. The truth maybe?

The Old Bodyguard At Work

By way of explanation, he told the judges it had been ‘civil war’ and that what really vexed him was that ‘Part of the political class and the media are on the side of the rioters. I deplore this.’ That could well explain why he thinks he actually ‘deserves a medal’ and that he ‘never wanted to be violent’.

Part of Benalla’s problem was that obviously no-one had explained to him what was meant by the word ‘observer’. Evidently, he saw the role as more interventionist than just watching the squabbling. He was also discomfited by having to admit he’d invited his mate, Crase (from the security team of the President’s LREM Party) for the May Day fun … and that silly old so-and-so took along his Glock 17. The way one does. At least Benalla had been intelligent enough to work out he had to leave all his 3 Glocks (to wit 17, 19 and 26) at home. He probably knew they weren’t off to any restaurant that evening – and besides there was no Presidential Election that week. [One of Benalla’s biggest porky-pies was that he never carried a weapon outside campaign HQ]

What The Old Bodyguard Did Off Duty

The Old Bodyguard Wouldn’t Have Let This Happen

This is the selfie, taken during the President’s post-UN visit to the French West Indies, that caused normally warm-hearted Marine Le Pen to expostulate about one of two brothers giving the finger [he later said it wasn’t directed at the President]: ‘I can’t even find words sufficient to express our outrage. France certainly doesn’t deserve this. It’s unforgivable.’

Benalla let it be known this week that if he’d been there that pic would never have happened: ‘Those guys would not have touched the President and I’d have avoided the selfie … [He] so totally fell for it’ [‘like a six week old rabbit’ is what Benalla says].

It was all a conspiracy

Benalla says he got into these judicial difficulties because a senior Interior Ministry functionary dished the dirt – and that was because his own proximity to the President, plus the then new Elysée organigramme which ‘irritated the police and gendarmes’.

Benalla told the judges that, when he was detained by the police in July – once the story exploded in the press – his work phone was being examined by the police. In a scene worthy of the best Hollywood political movies, Benalla’s SMSs started disappearing from his phone, and the phone’s date changed itself to 1970. Did the Elysée manage to introduce a bug into Benalla’s phone? Was the wiping being done in real time by persons unknown, high in some Elysian redoubt? Spooky.

The New Bodyguard’s getting back on his feet

Benalla’s now got his own ‘international security company’. He’s clearly got solid references from his Presidential service (one serious mistake only).

Plus he has influential mates who enable him to get super-hot lawyers [in GQ‘s list of ‘most powerful lawyers’, the double act of Haik-Laffont were 6th in 2017 and 14th in 2018]. Actually, that downward progress could confirm they’re Losing Their Legal Touch

His briefs have recently had a run of seriously bad luck with their high-profile celebrity political clients – of which there’s an almost endless supply. Ex-President Sarkozy is but the latest to suffer the Haik-Laffont Curse. It looks increasingly certain that Sarko will face trial on one of his (almost-too-many-to-count) charges. This one’s for good old-fashioned corruption: Sarkozy’s accused of having offered super-promotion to a judge in exchange for secret information.

The New Bodyguard Off Duty

As I said, Benalla’s come out smelling of something sufficiently sweet that he was invited to lunch with (entre autres) the Chinese Ambassador at the so-called ‘Chinese Business Club’, a networking event for C list celebs. Fellow-guests included several ex-Ministers who will never again be Ministers (eg France’s last (-ever) Socialist Prime Minister Cazeneuve, plus Idrac and Montebourg), some not very famous actors and a TV sports presenter (Nelson Montfort).

Meanwhile, our anti-hero contemplatively muses on what might have been. He watches life from the edge of the room, replete with slicked-down hair, be-suited and be-tied. So different from that centre-stage wild boy insufficiently-hidden by his police helmet. 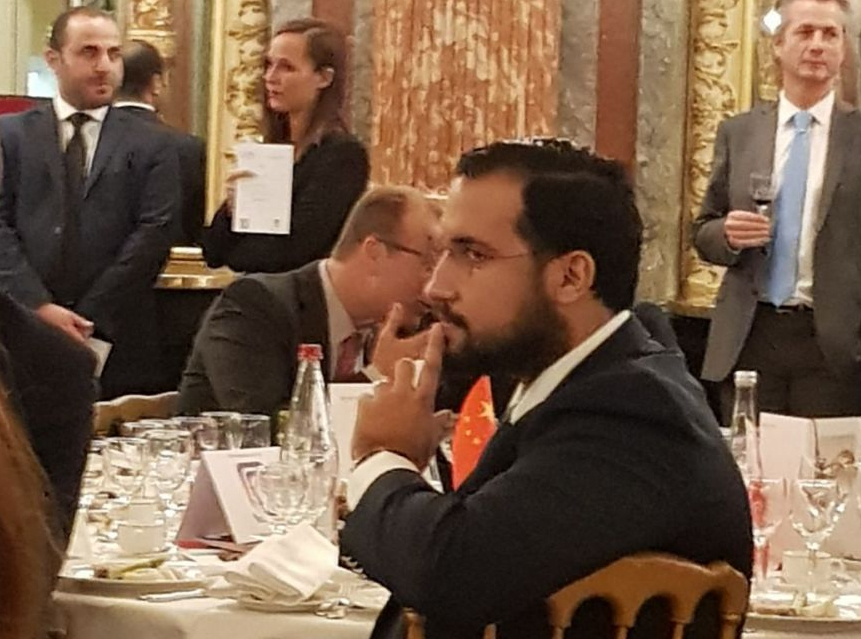 Enough of The Bodyguard. What About The President?

It was a public holiday yesterday … so why not take a day’s leave on Friday? Government spokesperson, Griveaux, told us that ‘Like millions of French people … the President of the Republic can have a few days off. And that’s what’s happening.’

Why not indeed? The President advanced this week’s Ministerial meeting by a day so as to be able have an extra day’s holiday between Thursday’s public holiday, All Saints Day, and the weekend. Hence, in the local argot, he ‘made a bridge’ [more about ‘bridges’ and ‘viaducts’ in my earlier post here]. For what it’s worth he and the First Lady went to Normandy (supposedly luxurious Ferme Saint Simeon hotel, Honfleur, where Baudelaire and Impressionists galore spent time). Afterwards, the President will visit 11 northern and eastern Departments over 6 days, culminating in the centenary of the end of the First World War, followed by the first Paris Peace Forum.

Why mention this – apart from envy of the President’s holiday resort? Because there’s been extensive speculation as to what may underlie the Presidential mini-break.

Macron explained he’d been in Honfleur on All Saints for 20+ years, saying ‘I’m not changing. I’m working at the same pace.’ And before leaving for his Awaydays, he gave an interview to Ouest France aimed at the Halloween audience. Apocalyptically, he warned of ‘Europe dismembering itself because of the nationalist leprosy’.

He said he was ‘struck’ by the resemblance between Europe’s current situation and what pertained in the inter-war years. ‘Europe is divided by fears, falling back on nationalism, with the consequences of the economic crisis, you see … everything that marked out life in Europe between the end of World War One and the 1929 crisis … This must be kept in mind  … to know how to resist it.’

By way of a coda, Macron may have felt tireder still when he read BVA‘s latest poll, showing 29% satisfaction (-3 points) with him, while Prime Minister Philippe rose to 40% support (+1). Will the President decide that the Odd Couple need to get uncoupled? If it goes on like this Philippe could really be building support for a possible future Presidential run. Still, at least ultra-left Tribune of the People, Mélenchon, continues to suffer from his rush of abusive verbal blood: he’s dropped to 18% (-7) satisfaction.

One thought on “One of the President’s (ex-)Men”